So, how do Labor Day and the Dept. of Labor relate to each other? Which came first? What’s this cybersecurity milestone all about? And what are your barbecue plans for the holiday?

In this blog, we’ll answer three of those questions and share some additional information you may find interesting.

How and Why Labor Day Came to Be

We already know that Labor Day preceded the Department of Labor by almost 20 years. Before it became a federal holiday in 1894, an early, unofficial version of Labor Day was popularized by labor unions and labor activists. 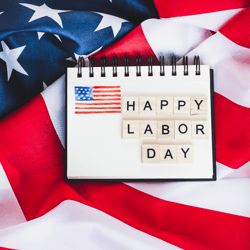 The first Labor Day holiday on record was celebrated on a Tuesday, September 5, 1882, in New York City. Festivities were initiated by the Central Labor Union.

In its early days, Labor Day was about honoring organized trade and union labor for their contributions to society and the economy. With parades and speeches and picnics, the holiday celebrated the important role these workers played in making America strong and prosperous.

The Knights of Labor, American Federation of Labor (AFL), machinists, carpenters, railroad brotherhoods, and even the Women’s Auxiliary Typographical Union all turned out on the self-declared holiday in an organized show of strength and pride.

Although New York was the first state to introduce a bill, it was Oregon that, in 1887, passed the first state law recognizing Labor Day. Over the next seven years, 30 more states followed suit. Then, in June of 1894, Congress passed an act that officially made the first Monday of every September a legal holiday in honor of labor.

Celebrating hard-working men and women and the fruits of their labor is now a century-old tradition. Occupying its permanent place on the first Monday in September, Labor Day also creates a welcome holiday weekend and, for most, marks the end of another summer.

Fast-forward from 1894 to 1913, when the U.S. Department of Labor (DOL) was established by outgoing President William H. Taft. Taft signed into law the Sulzer Bill to finally create a Department of Labor at the Cabinet level, giving it the stature desired by labor leaders of the day.

The movement to form this department began shortly after the Civil War—well before the first Labor Day in 1882. The drive was led by William Sylvis, a prominent labor leader at a time when labor unions were beginning to flex their muscles. 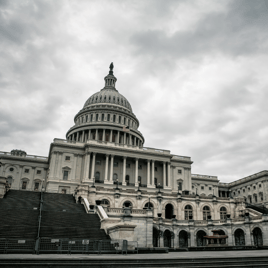 In the 36 years between 1864 and 1900, more than 100 bills and resolutions were introduced in Congress related to a Department of Labor. Ultimately, the Sulzer bill prevailed and was signed into law in March of 1913.

By that time, Labor Day had been celebrating the American unionization movement for just over 30 years. The Department of Labor aimed to augment the unions by providing additional protections for workers, particularly the non-union worker population.

Today, the DOL is a Cabinet-level department with 26 agencies under its wing. Among the best known is the Bureau of Labor Statistics, the Office of Workers’ Compensation Programs, and the Occupational Safety and Health Administration (OSHA).

In broad strokes, the DOL protects the rights of workers and retirees, provides job training, and develops statistics related to work, prices, and income. It is responsible for administering “federal labor laws to guarantee workers' rights to fair, safe, and healthy working conditions, including minimum hourly wage and overtime pay, protection against employment discrimination, and unemployment insurance.”

This year, the U.S. Department of Labor is 108 years old and still going strong. It has stayed current and relevant by evolving as the American worker, the labor union, and the U.S. workplace have continued to grow and change.

One of the DOL’s 26 agencies is the Employee Benefits Security Administration (EBSA). Broadly speaking, EBSA is responsible for ensuring “the security of the retirement, health, and other workplace-related benefits of America’s workers and their families.” As part of its mission, EBSA develops effective regulations; assists and educates workers, benefit plan sponsors, fiduciaries and benefit plan service providers; and vigorously enforces applicable laws.

EBSA’s scope is vast. The agency has responsibility for educating and assisting nearly 154 million American workers, retirees, and their families who are covered by approximately 722,000 private retirement plans, 2.5 million health plans, and 885,000 other welfare benefit plans. Together, these plans represent approximately $12.2 trillion in financial assets. 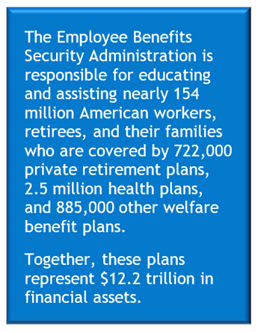 Enacted in 1974, ERISA is a federal tax and labor law that establishes minimum standards for pension plans in the private sector and protects the interests of employee benefit plan participants and their beneficiaries. ERISA is just one of the dozens of federal regulations requiring compliance by public and private sector organizations.

According to a DOL EBSA press release in March of 2021, without sufficient protections, these 154 million individuals and their $12.2 trillion in assets could be at risk from both internal and external cybersecurity threats. With cybercrime continuing to explode, the seriousness of this potential risk prompted EBSA to formally issue cybersecurity guidance in 2021 for the first time.

The guidance includes best practices for maintaining cybersecurity, as well as tips on how to protect the retirement benefits of America’s workers. And while the cybersecurity guidance is primarily directed at plan sponsors and fiduciaries who are subject to ERISA regulations, anyone can benefit from these comprehensive best practices.

With this milestone of 2021, the Employee Benefits Security Administration lent strong and public support for the adoption of cybersecurity safeguards, including cybersecurity training, among its many constituents. The stakes are too high to do otherwise.

Since the late 1800s, organized labor unions have offered their members the power of collective bargaining for more pay, better benefits, improved working conditions, shorter workdays, and other protections. To help make the case for organized labor and its benefits, in 1882 union leaders initiated a special holiday honoring labor and were successful in having it declared a legal national holiday in 1894.

In addition, during roughly the same timeframe, union leaders and others vigorously promoted the idea of a Cabinet-level Department of Labor. In 1913, the U.S. Department of Labor was established to provide further protections for American workers, including non-unionized labor. These measures range from safeguarding their physical well-being at work to ensuring minimum hourly wage and overtime pay, securing their retirement funds, and more.

Today, over a century later, almost every act of business occurs via the Internet. Significant trade, commerce, and office work rely on the Internet, and enormous volumes of data move through the Internet. Businesses and governments alike recognize the vital importance of protecting transactions, funds, and personal and private data in cyberspace. The DOL’s Employee Benefits Security Administration has taken a large stride forward this year by promoting cybersecurity protections among those it serves.

Every organization needs a cybersecurity program and most need a compliance program, too. Many types of businesses are vulnerable to sophisticated scams and ransomware crimes. Find out the extent of your vulnerability with a security risk assessment conducted by our certified professionals. Summer’s over. Let’s get back to business.

Cybersecurity Risk in the Healthcare Industry